Exiles first half glory in the backs brought about victory against a SODAM side with a very dominant scrum.
Nick Greenhalgh reports from the back of the scrum! 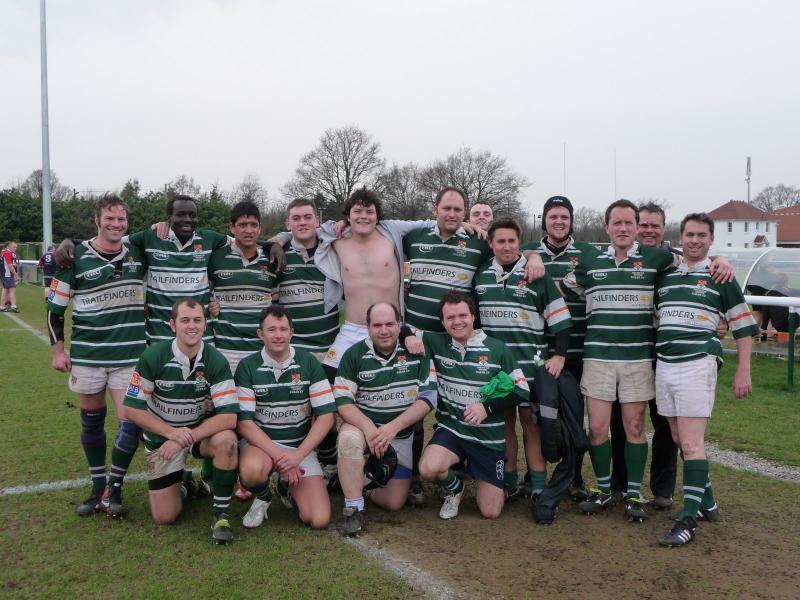 Clockwise from kneeling bottom right: Mike, Ghassan,Spike,Stef,Nick,Alex,T,Jareth,Tom Tom,Eff,Mystery Man,Brandon,Anthony,Dave Morgan,Steve R,Neal
This was only our second game of the season against SODAM which is most unusual as we normally play half a dozen times a season due to them being a similar outfit and level to the Exiles, enjoying a run out every weekend followed by a few Guinnness, even if our oppositions pull out!

This Saturday the Exiles were bolstered by four visitors, in the form of Andy Cleary’s 18 year old son Liam and three of his eighteen year old mates.  As the average age of the Exiles pushes the low 40’s this injection of youth made us all smile, especially as the difference in pace being shown was dumbfounding everyone.

The game started at a fast pace and pretty much stayed that way throughout.  The first try came pretty shortly after kickoff.  I seem to recall there was the first controversial quick line out of the day (the second being in the Wales v Ireland’s 6 nations match) which culminated in Alex A throwing a lovely long pass straight to the embracing arms of a youthful guest player, he flew down the wing and although hindered in pulling off the swallow dive by a last ditch tackle attempt he did manage to ground the ball in a "Frosbury flop" style.

Shortly after that we were back down in their half again due to some great moves from our backs.  We fumbled the ball and there was a scrum 5 yards out, Sodam put in. Somehow our talented front five managed to disrupt the Sodam pack and against the head the ball spilled back to the Ealing scrum. I saw it rolling my way (as number 8) and the scrum starting to wheel wildly so I grabbed the little beauty and ran 3 or so yards unimpeded to dot the ball down for our second try. Learning from my mistakes of last week I grounded it as soon as got over the line!  Shortly after that I seem to recall the backs had yet another good passage of play and Liam got his first try between the uprights.

After this restart we made mistakes, the ball was allowed to bounce from a kick-off due to poor play partly on my part and the Sodam forwards were all over it.  Various skirmishes ensued and we found ourselves putting the ball down over the line and giving SODAM a five yard scrum.  The SODAM pack beasted us back over our line and scored a lovely pushover try.  It was clear we’d need to try and avoid giving them scrums within the 22 yard line!

We scored one more try in the first half (Liam or hist friend again) and went into half time with a nice lead, 24 – 7.  We were also blessed by a having 19 or 20 players and so through out the match were able to rest players for periods of time.  Given the speed at which the game was being played out at this was very useful.  The pace kept on building in the second half, but sadly the youngsters and a youngster’s parent (Andy 😉 ) made the odd mistake and the rich seem of try gold we’d hoped for was not being made available to us with such little effort anymore.

Dave MacSweeney managed the score sheet yet again with one of his trade mark charges.

SODAM on the other hand were cranking up the pressure.  They worked very well in both 1st and 2nd phases. Stef was snagged several times due to lack of protection at the breakdown.  We kept on failing to secure our ball. SODAM we mastering the turn over.  The ability to strong arm a ball into our possession seemed to be a distant memory.  Little by little they got closer to our line and managed to score two well deserved tries bringing the scoreline closer.

Favorite memory of the game was being one of four or five players from the two sides scuffling wildly on the floor to stop the ball from being grounded. I had one hand under the ball, my other arm had a SODAM boot clamping it to the park, another Exiles was rolling the SODAM ball carriers arm and upper body upwards. All of us looking at the ball and the think white line below it waiting for the ref to make his mind up.  Try or no try?  What was it to be. The thick white line we were fighting so fiercely over was actually the 5 yard line! Dough!

Second favourite memory was seeing "T" catch the ball from a restart. He took off sideways despite calls for him to straighten up. As he cut sideways and behind Stef a SODAM freight train collided with Stef almost turning him into anti matter! Stef was rightly penalised for blocking though thankfully not carded this time. If it doesn’t kill you it makes you stronger 😉

As time was running out and SODAM getting stronger Stef made a cracking break and hot on his shoulder was Neal Craig who took the off load perfectly and scored a nice centre’s try! 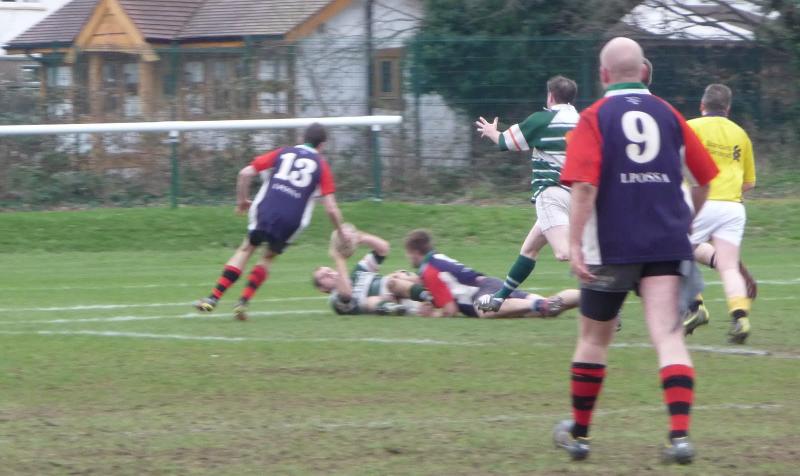 Legend McCabe pops the ball to pace man Craigy who runs in his first try in quite some time – nice!
Frantic and enjoyable match for the Exiles, and due to our youthful guests we managed to get the victory. A marked improvement on last weeks shenanigans in High Wycombe. I suspect without our young friends the end scores would have mimicked the second half scores, a draw!  Thanks as usual to Ian, Pete, Chris, Slaps and the rest of the boys from SODAM.

Exiles need to work on the points mentioned above if we are to stand a chance of winning in our final pre-playoff league match next weekend against London Welsh.  We need a win or draw to get through to the playoffs!  Last time we played the Welsh we lost by a point!  Hopefully we can get a strong team out and get a victory next weekend!