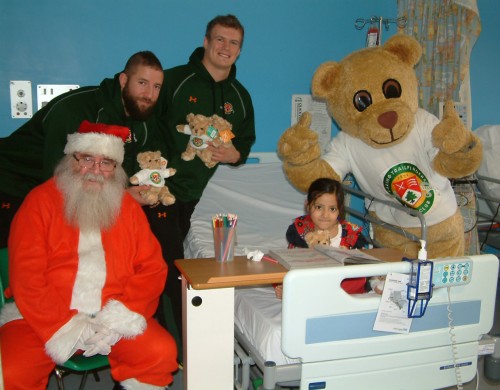 Ealing Trailfinders first XV players Gavin Curry and Chris Kinloch helped get the Christmas festivities started at Ealing Hospital when they paid a visit to the paediatric department last week.

The pair were joined by Father Christmas and Ealing’s mascot Bruno the Bear to give out Ealing Trailfinders teddy bears to the children, many of whom are fighting serious illness.

“It was great for the club to send the players and mascot along to meet the children and the families,” paediatric matron Carol Dinsley said. “They helped put a smile on the faces of all the children and everyone else in what is a special time of the year for all. 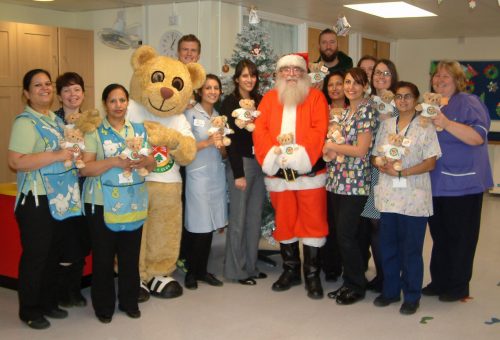 “Some of these children and families are going through a tough time as they fight their illness, so even a simple visit from some friendly faces helps them massively.”

Ealing Hospital’s paediatric department are currently asking for families in the area to donate a toy for Christmas, with parents within the rugby club asked to donate a new gift of their choice to be given to a child in hospital over Christmas. If you would like to donate please pass the toy on to Tim Dinsley, membership secretary on Sunday in the foyer of the club house.

Both players have been involved in Ealing’s first season in the Greene King IPA Championship. Vice-captain Kinloch has already grabbed two tries, while Curry has continued his sterling work in the second row, having been part of the side that won promotion from National 1.

“It was great to get down and meet the kids,” Kinloch said. “Some of them are fighting some truly serious illnesses, but you wouldn’t have guessed from the spirit they showed.

“Hopefully we can help put a smile on their faces at what must be a tough time for their families, especially at a time of year when we take for granted that we’ll be spending time with our own loved ones.”

Ealing’s next match is a home British and Irish fixture against Moseley on Friday 13, before they close out the year with the visit of Bristol on Saturday 21 December, kick-off at 3pm.